Cohen lab Post Doc Douglas Ruff studies how internal states, like attention, affect the responses of populations of neurons. They have found that attention can increase the shared variability in neural firing across cortical areas, thus promoting communication between those areas. 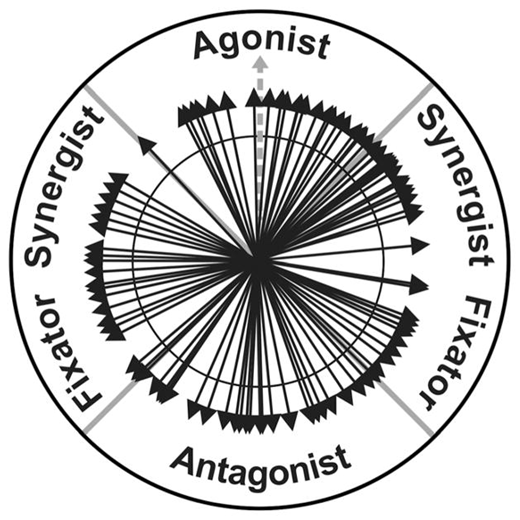 Strick lab Post Doc Darcy Griffin is deciphering the neural code for movement. She uses spike-triggered averaging, to identify neurons that project from motor cortex directly to spinal motoneurons. This allows her to assess the context under which these cells fire. She has found that corticomotoneuronal cells are specific for generating individual functions (like agonist or fixator actions) of their target muscle’s activity.

Former ECE student Matt Golub explains the mistakes we make as resulting from discrepancies between how we think the world works (i.e., our internal models) and how the world actually works. Pictured above is a cursor movement produced by an animal using a brain-machine interface (BMI). Although this movement (black line) erroneously veers away from the target, the animal internally believed he was generating a straight-to-target movement (red whiskers, according to the animal’s internal model of the BMI).

Psychology student Kyle Dunovan is exploring how we decide to perform an action or not, as when we decide to swing at a thrown baseball pitch. He is building new computational models of inhibitory control based on the pathway-level organization of cortico-basal ganglia loops.

Computational neuroscience brings many ideas and tools associated with computation to the study of the nervous system. Major influences have come from the success of biophysical models of neural activity, the enduring appeal of the brain-as-computer metaphor, and the increasing prominence of statistical and machine learning methods throughout science. Here in Pittsburgh we have an exceptionally large and vibrant community of neuroscientists who develop and/or apply cutting-edge computational methods in their work. We offer a Ph.D. through our Program in Neural Computation (PNC), an undergraduate minor in neural computation, year-long fellowships for CMU and Pitt undergraduates, and a program of summer undergraduate research that draws students from across the U.S. Our research may be described, roughly, as falling into one or more of the following three broad categories:

Modeling of Neurons and Neural Circuits

The synaptic wiring and response properties of biophysically realistic neural networks are extremely complicated, yet they are amenable to both theoretical and experimental investigation. Modeling of neural behavior uses techniques from dynamical systems theory and statistics, with a central goal of elucidating the way information is represented by the diverse patterns of neural spiking activity, which is often labeled neural coding.

Recording and Analysis of Network Activity

A large number of faculty are interested in collection, analysis, and modeling of large-scale population recording. This creates a reservoir of support for those who want to apply, or get training in, cutting-edge analytical methods. It also produces a broadened notion of computational modeling to include statistical models, which have come to play important roles in contemporary conceptualizations of neural processing.

Those whose expertise is primarily computational include:

Those whose expertise is primarily experimental include:

Those whose expertise is both computational and experimental include: